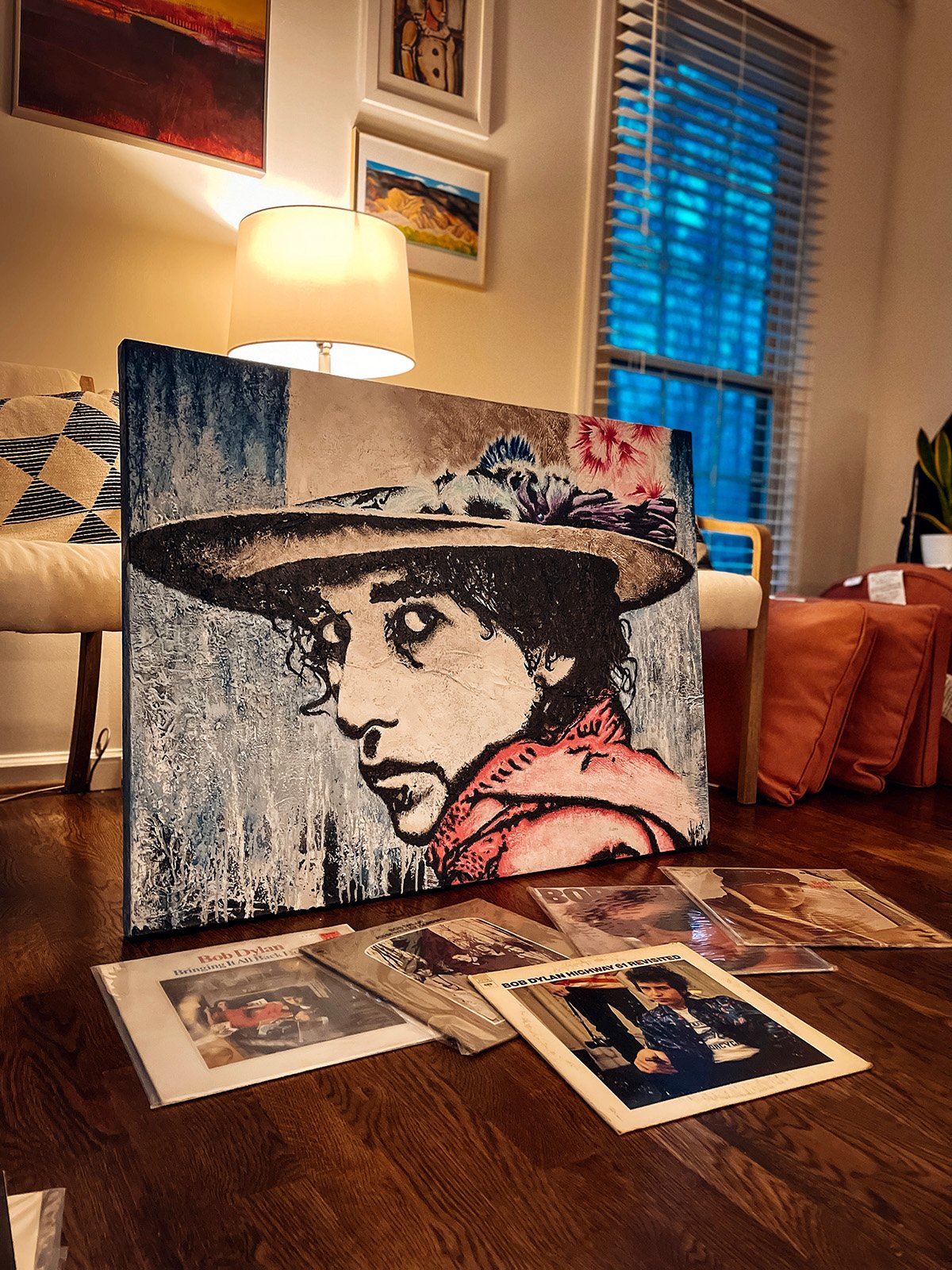 Sometimes it’s the end of the road for a piece and time to breathe in a new life and a new story.

For this piece, I decided to reuse one of my enneagram abstracts from 2019 titled “Anguish”. And this felt like the perfect base to build on using Dylan’s lyrics as inspiration. I’ve Included a frame for reference.

Welcome in a new Bob Dylan Icons & Legends original “A Hard Rain.” Named after his song “A Hard Rain’s a-Gonna Fall” written by American musician and Nobel Laureate Bob Dylan in the summer of 1962 and recorded later that year for his second album, The Freewheelin’ Bob Dylan (1963). Its lyrical structure is modeled after the question and answer form of traditional ballads such as “Lord Randall“.

Here is the repurposed enneagram base painting titled ANGUISH from 2019. 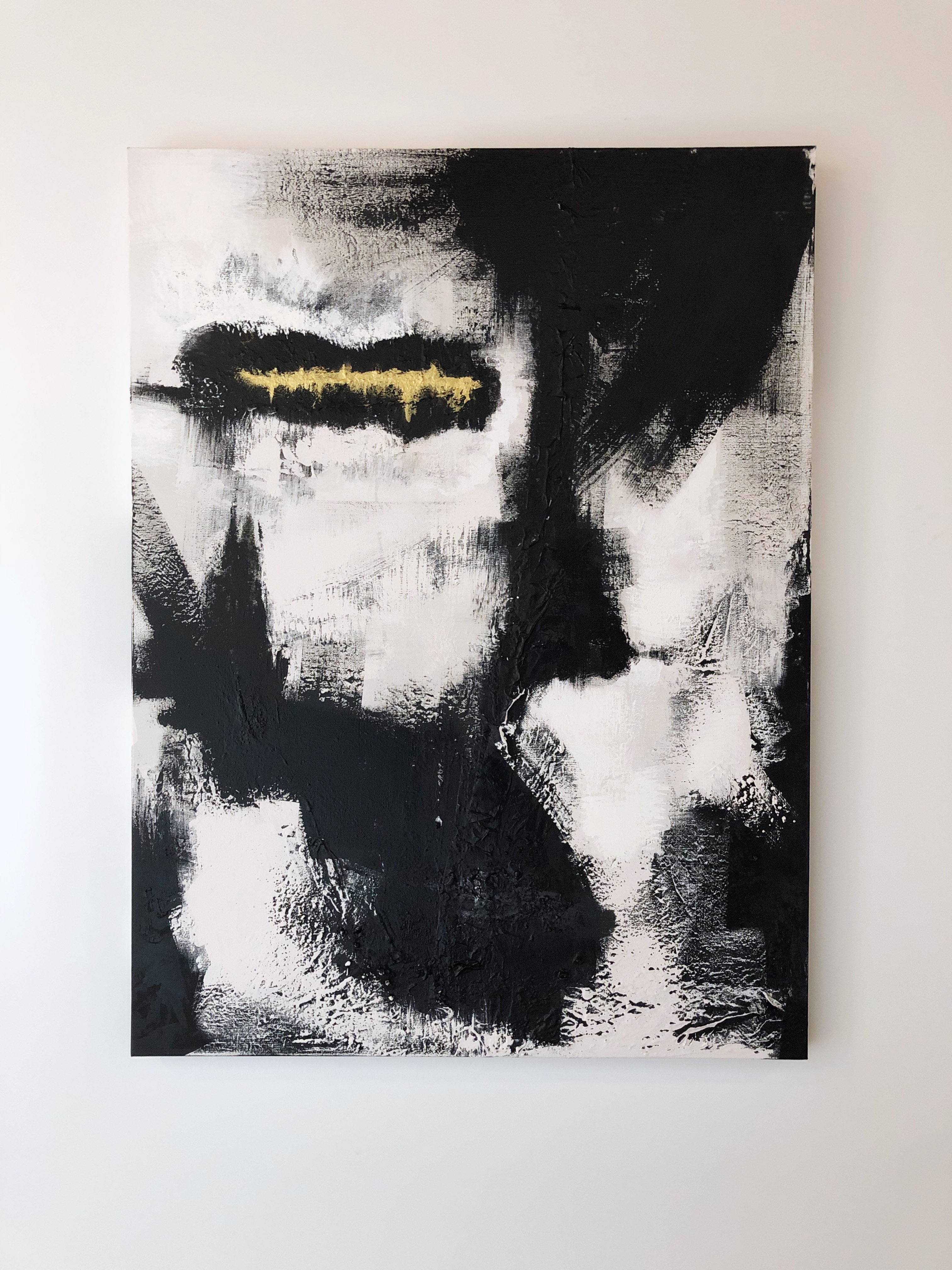 Here are some process and build pix of the final piece. 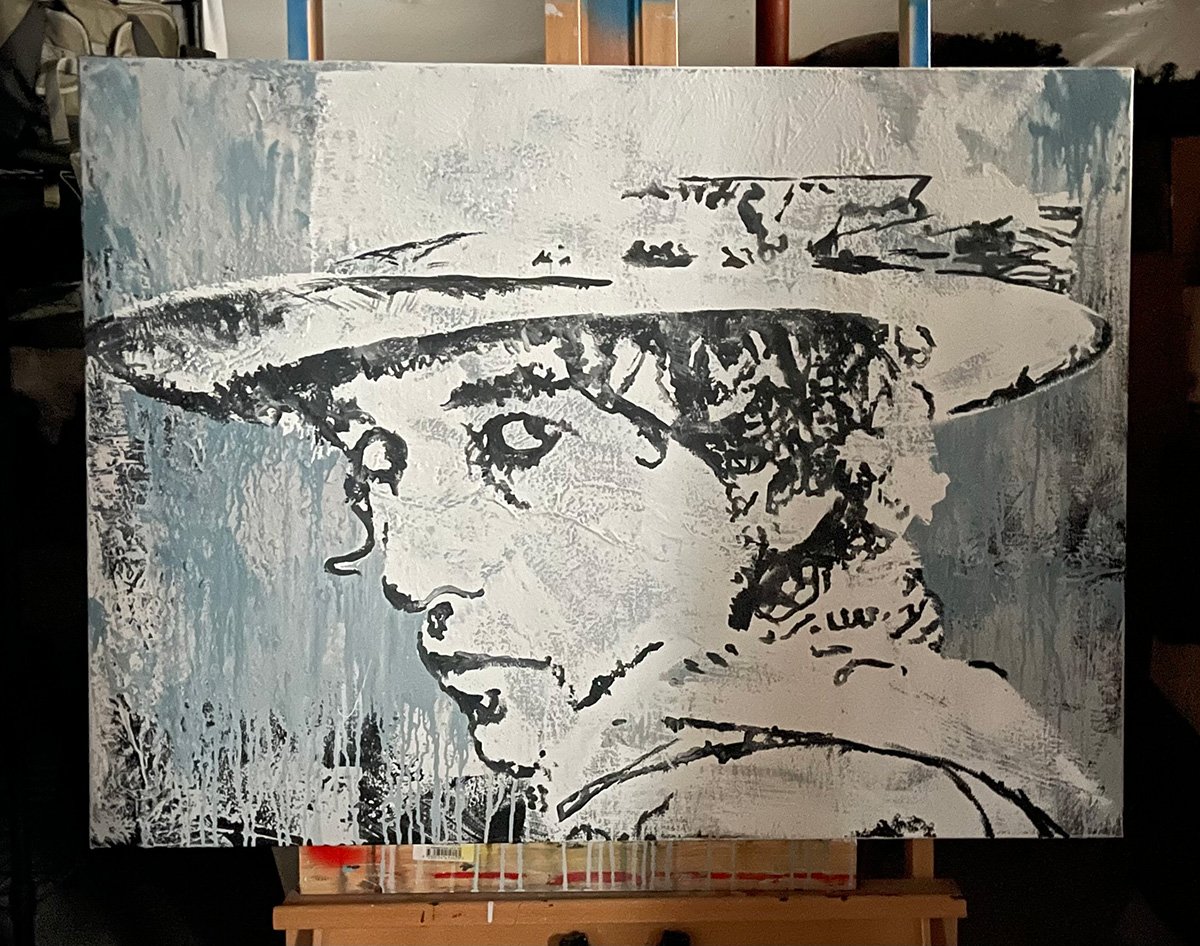 This is the initial cut in of the base layers. 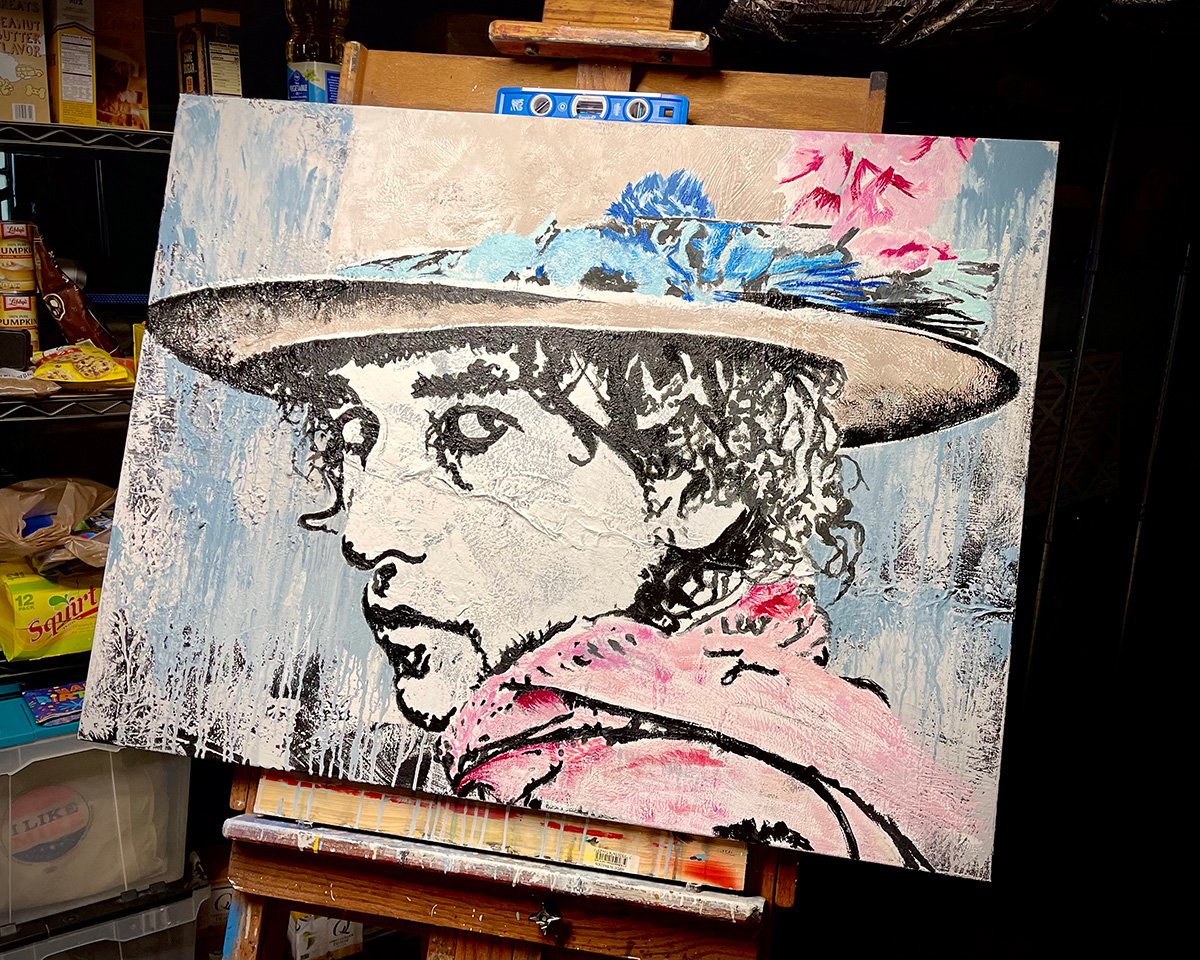 First layers of base colors before working in the details.

Finishing off the gallery wrapped side edges. 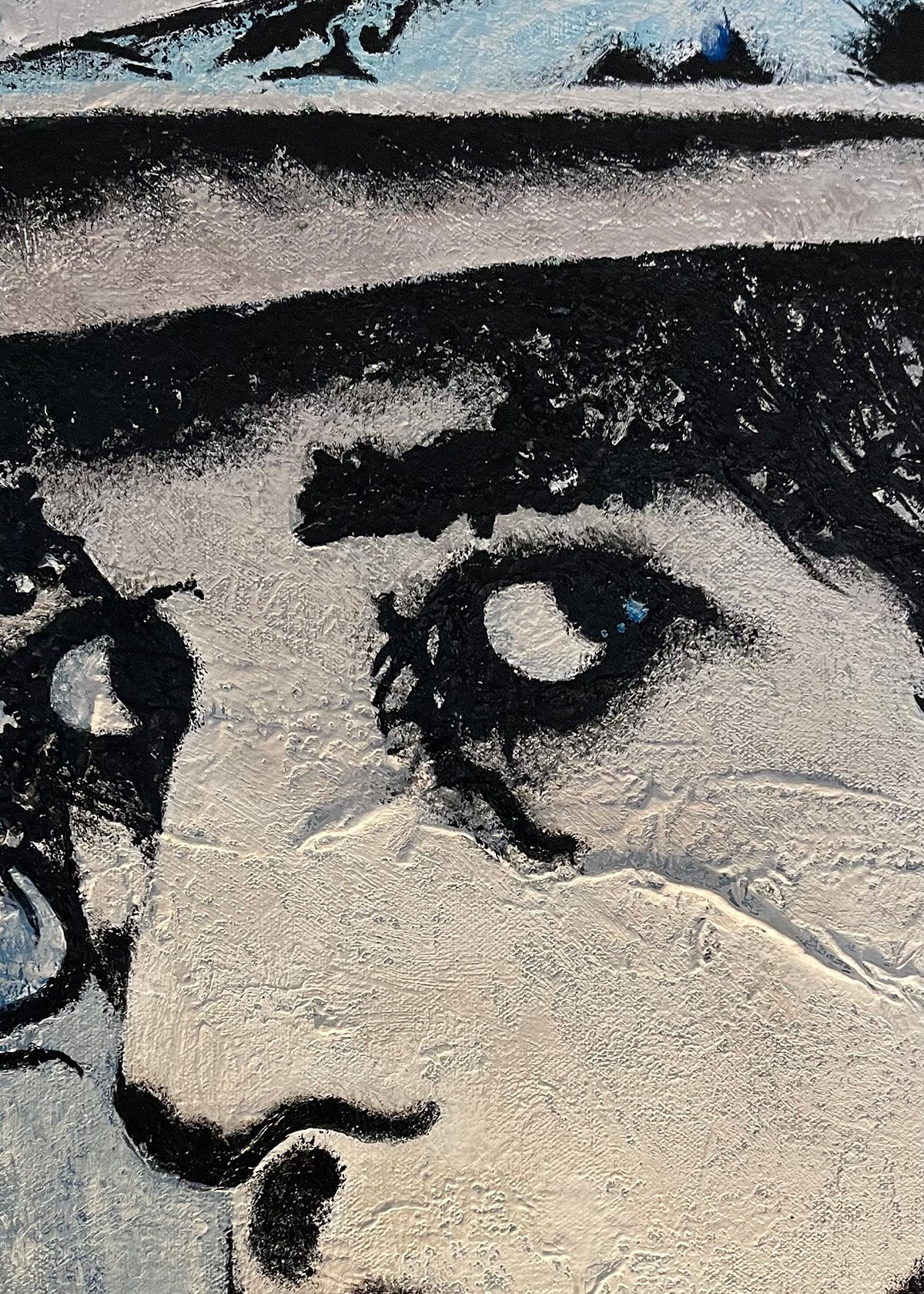 Detail of eyes and texture. 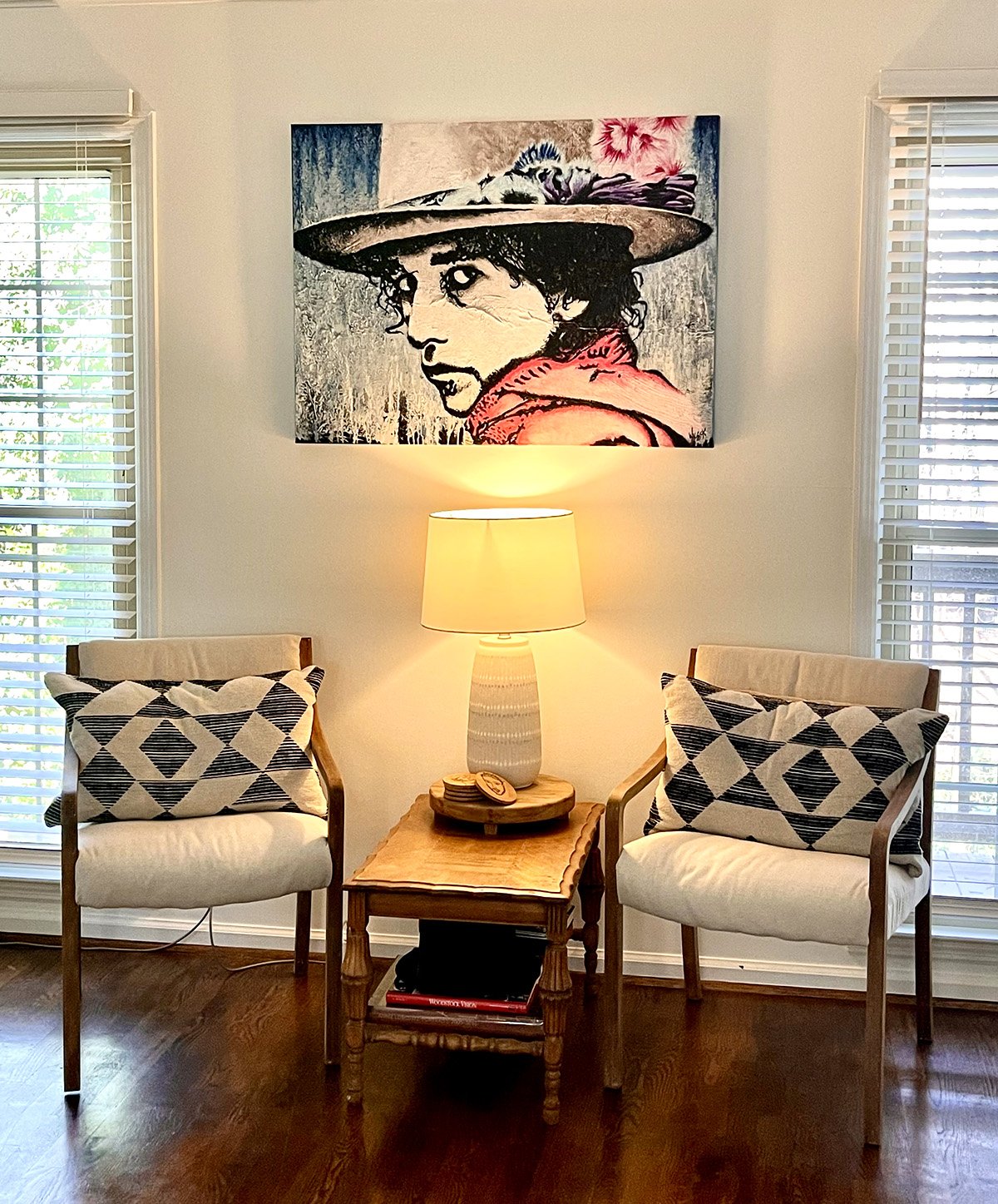 Lifestyle shot of this piece in my client’s home.

This portrait is similar in the style I created back in 2020 and features lots of chunky layers but has a mix of some softened edges similar to pinhole photography and hard edges like high contrast photo copies. I really like how this effect fits the mood of the piece.

Dylan originally wrote “A Hard Rain’s a-Gonna Fall” in the form of a poem. The first iteration of the lyrics was written on a typewriter in the shared apartment of Dylan’s friends Wavy Gravy and singer Tom Paxton, within Greenwich Village, New York City.[4] Significant edits occurred after this time, for instance, an earlier draft which appeared in both Sing Out and Broadside folk magazines contained “a highway of golden with nobody on it” rather than the final lyric “a highway of diamonds”.

For more info about this song, here is the Wikipedia link.

If you are interested in purchasing this piece or commissioning work, please call or email the studio